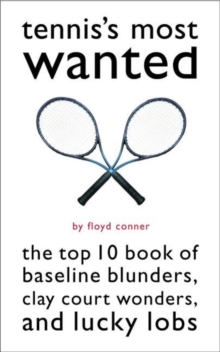 Award-winning tennis writer Paul Fein is back at his shot-making best with "Tennis Confidential II: More of Today's Greatest Players, Matches, and Controversies".

Tennis keeps moving forward and so does Fein, giving readers his insightful and thought-provoking opinions on a myriad of hot-button topics.Who is the greatest men's player ever?

Who is the greatest women's player ever? Is it clever or counter-productive to let players challenge line calls?

How about on-court coaching? Scoring system changes? The television networks and tennis' ruling bodies fervently push these controversial reforms, but do they help or hurt tennis?

Fein questions and debunks conventional wisdom as only he can, and his in-depth knowledge and authoritative analyses of the sport provide a welcome perspective.Fein writes about today's headliners like Roger Federer, Maria Sharapova, Andy Roddick, and the Williams sisters, plus popular former champions such as Andre Agassi, Yannick Noah, Jim Courier, Martina Hingis, and Stefan Edberg. He chronicles the exciting evolution of women's tennis and its heroic pioneers, explains the near-extinction of the dynamic serve-and-volley game and how to save it, and revisits an unforgettable era when tennis players "rocked."This entertaining and compelling compendium of tennis interviews, features, and essays is sure to intrigue, inform, and enlighten.

Anyone who enjoys reading about tennis will find Paul Fein's "Tennis Confidential II" a winner.