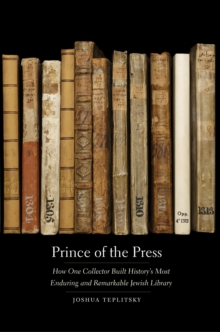 Prince of the Press : How One Collector Built History&#39;s Most Enduring and Remarkable Jewish Library EPUB

David Oppenheim (1664–1736), chief rabbi of Prague in the early eighteenth century, built an unparalleled collection of Jewish books and manuscripts, all of which have survived and are housed in the Bodleian Library at Oxford.

His remarkable collection testifies to the myriad connections Jews maintained with each other across political borders, and the contacts between Christians and Jews that books facilitated.

From contact with the great courts of European nobility to the poor of Jerusalem, his family ties brought him into networks of power, prestige, and opportunity that extended across Europe and the Mediterranean basin.

Containing works of law and literature alongside prayer and poetry, his library served rabbinic scholars and communal leaders, introduced old books to new readers, and functioned as a unique source of personal authority that gained him fame throughout Jewish society and beyond.

The story of his life and library brings together culture, commerce, and politics, all filtered through this extraordinary collection.

Based on the careful reconstruction of an archive that is still visited by scholars today, Joshua Teplitsky’s book offers a window into the social life of Jewish books in early modern Europe.