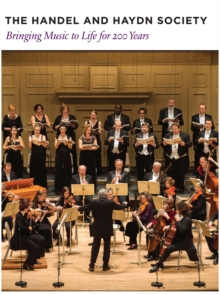 The Handel and Haydn Society : Bringing Music to Life for 200 Years Hardback

This is an insightful and entertaining history of one of America's oldest and most respected classical orchestras.

Founded in 1815, the Handel and Haydn Society is the oldest continuously performing arts organization in America.

The seven essays collected here bring to life the rich history of this venerable organization.

Building on the music of Handel (the classical forefather) and Haydn (the innovator), H&H has grown and changed over the years to become today's foremost exponent of Baroque and Classical music and the leading period instrument orchestra and chorus in America.

Throughout the history of H&H, the idea of combining the old and new has remained integral to its mission.

From 1815, in choosing its namesake composers, to its twenty-first-century practice of programming and commissioning new music to be performed alongside that of the eighteenth century, H&H has never forgotten its heritage, beautifully presented here in full colour with photographs and artefacts, a tribute to the many individuals who collaborated and created in the name of music, and who made this institution a model of its kind.