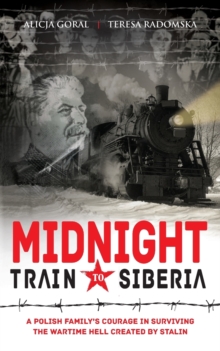 One freezing February night in 1940, fifteen-year-old Alicja Radomski, her parents and younger sister and brother were dragged from their home and forced to board a cattle train to be transported over a thousand miles to the wastes of Siberia.

They were just one of many thousands of Polish families sent to labour camps by Stalin and his thugs after the Soviets seized their country at the outbreak of World War II.

They became 'non-persons', forced to work from dawn to dusk in freezing conditions on rations scarcely fit for a rat.

Ultimately, the Radomskis were among the lucky ones - they managed to survive their ordeal, to return to Europe and find new homes eventually in post-war England, where Alicja married a British serviceman and the family found peace and security.

Alicja, now 89, has now told her shocking, heart-rending story with the help of her daughter Teresa.