Terry Pinkard draws on Hegel's central works as well as his lectures on aesthetics, the history of philosophy, and the philosophy of history in this deeply informed and original exploration of Hegel's naturalism.

As Pinkard explains, Hegel's version of naturalism was in fact drawn from Aristotelian naturalism: Hegel fused Aristotle's conception of nature with his insistence that the origin and development of philosophy has empirical physics as its presupposition.

Asa result, Hegel found that, although modern nature must be understood as a whole to be non-purposive, there is nonetheless a place for Aristotelian purposiveness within such nature.

Such a naturalism provides the framework for explaining how we are both natural organisms and also practically minded(self-determining, rationally responsive, reason-giving) beings.

In arguing for this point, Hegel shows that the kind of self-division which is characteristic of human agency also provides human agents with an updated version of an Aristotelian final end of life.

Pinkard treats this conception of the final end of "being at one with oneself" in two parts.

The first part focuses on Hegel's account of agency in naturalist terms and how it is that agency requires such a self-division, while the second part explores how Hegel thinks a historical narration is essential for understanding what this kind of self-division has come to require of itself.

In making his case, Hegel argues that both the antinomies of philosophical thought and the essentialfragmentation of modern life are all not to be understood as overcome in a higher order unity in the "State." On the contrary, Hegel demonstrates that modern institutions do not resolve such tensions any more than a comprehensive philosophical account can resolve them theoretically.

The job of modern practicesand institutions (and at a reflective level the task of modern philosophy) is to help us understand and live with precisely the unresolvability of these oppositions.

Therefore, Pinkard explains, Hegel is not the totality theorist he has been taken to be, nor is he an "identity thinker," a la Adorno.

He is an anti-totality thinker. 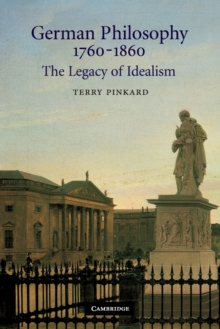