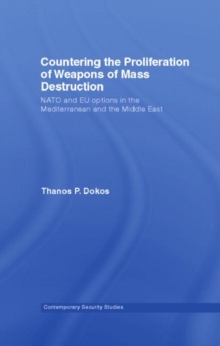 Countering the Proliferation of Weapons of Mass Destruction : NATO and EU Options in the Mediterranean and the Middle East Paperback / softback

As counter-profileration is expected to become the central element in the new national security policy of the US, such actions will constitute a central element of every major international conflict in the first decades of the 21st century.

One of the most important geostrategic phenomena of the past decade has been the extraordinary diffusion of war-making capabilities from the developed North to the developing South.

In the eyes of some proliferant states, possessing nuclear, biological and chemical (NBC) weapons would not only add to their regional stature, but would also offer an asymmetrical counter to the West's massive superiority in conventional forces.

In the Eastern Mediterranean and the Middle East, a number of countries are assumed to possess varying levels of NBC-weapons capabilities.

Reasons for concern include the fact that such weapons have been used in the past; the region's geographic proximity to Europe and the vital interests of the West (which is prepared, under certain circumstances, to use force to protect them); the multiplicity of conflicts and other security problems; and the general instability in the region (including the spread of religious extremism). This important and timely book assesses, in detail, the accuracy of predictions, and perceptions, about a possible military threat from the Southern Mediterranean (Muslim) world; and their impact on NATO's political and military posture.

Thanos P. Doxos presents an assessment of the Alliance's options for dealing with the problem.

This book represents an invaluable, topical resource for researchers and policy makers.