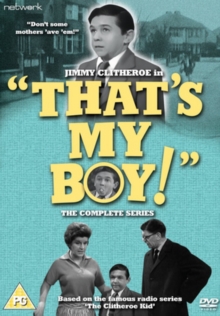 All seven episodes of the 1960s sitcom starring Northern comic Jimmy Clitheroe as a mischievous schoolboy who causes all manner of havoc for his family.

The show was based on the highly popular radio show 'The Clitheroe Kid', also starring Clitheroe, which numbered almost 300 episodes and in its prime regularly entertained an audience of ten million.

The sitcom was produced by ABC Television and co-starred Deryck Guyler, June Monkhouse and Vicky Harrington.

Also included is the only surviving episode of the sequel series 'Just Jimmy'.