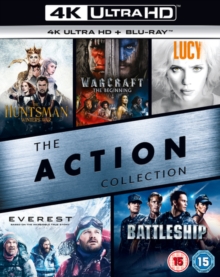 Collection of five action films. In 'The Huntsman - Winter's War' (2016) Chris Hemsworth reprises his role as Eric the Huntsman who has been trained by the embittered Ice Queen Freya (Emily Blunt) to become a soldier in her army of deadly hunters.

The fate of the kingdom may be in their hands however, when Freya brings her sister, the evil Queen Ravenna (Charlize Theron), back from the dead using the Magic Mirror and their combined power threatens to cast the land into darkness. 'Warcraft: The Beginning' (2016) follows the initial encounters between the humans and orcs as Azeroth stands on the brink of war.

In 'Lucy' (2014) Scarlett Johansson stars as the titular heroine who finds herself caught up in the dodgy dealings of the Taiwanese mob while living in Taipei.

Meanwhile, neurological scientist Professor Norman (Morgan Freeman) takes an interest in Lucy's evolution as she takes revenge on those responsible for her extraordinary transformation and evades those who wish to harness her powers for their own ends. 'Everest' (2015) tells the story of the 1996 climbing expedition in which two groups, led by Rob Hall (Jason Clarke) and Scott Fischer (Jake Gyllenhaal), attempted to reach the summit of Mount Everest.

Although the two groups had plentiful experience and had trained to deal with the adverse conditions and low oxygen levels that are present at such a high altitude, nothing could prepare them for the freak storm which hit during the expedition.

Finally, in 'Battleship' (2012) when US Navy personnel are confronted by an unknown alien structure during war-game trials, they quickly realise the enormity of the threat facing them.

As the aliens unleash a terrifying barrage of destructive force on the Earth's population, Admiral Shane (Liam Neeson), captain of the USS John Paul Jones, finds himself caught up in the fight of his life as he leads a fleet of ships into battle against the seemingly invincible extraterrestrial armada. 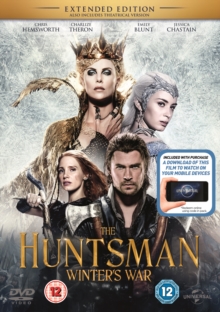