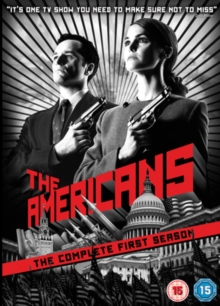 All the episodes from the first season of the US TV drama which follows a married couple assigned to spy for the KGB in Washington D.C..

Set during the early 1980s when the Cold War between Russia and the USA was reaching boiling point, the programme follows Elizabeth and Phillip Jennings (Keri Russell and Matthew Rhys) as they attempt to juggle the usual suburban responsibilities of childcare and socialising with the less conventional demands of managing informants, transmitting highly sensitive information and attending clandestine meetings.The episodes are: 'Pilot', 'The Clock', 'Gregory', 'In Control', 'COMINT', 'Trust Me', 'Duty and Honour', 'Mutually Assured Destruction', 'Safe House', 'Only You', 'Covert War', 'The Oath' and 'The Colonel'.