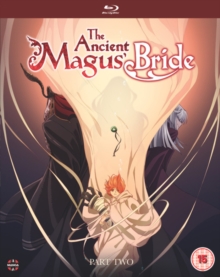 A further 12 episodes of the Japanese anime based on the manga by Kore Yamazaki.

Teenager Chise Hatori (voice of Atsumi Tanezaki) has been abandoned by her parents and allows herself to be sold at auction where she is bought by Elias Ainsworth (Ryouta Takeuchi), a magus who is only half-human and wears an animal skull for a head, and taken to her new home in the British countryside.

The unlikely pairing offers Chise the hope of stability and for Elias it is an opportunity to better understand human emotions.

The episodes are: 'East, West, Home's Best', 'Looks Breed Love', 'There Is No Place Like Home', 'God's Mill Grinds Slow But Sure', 'Look Before You Leap', 'Forgive and Forget', 'Any Port in a Storm', 'You Can't Make An Omelet Without Breaking a Few Eggs', 'Necessity Has No Law', 'As You Sow, So Shall You Reap', 'Nothing Seek, Nothing Find' and 'Live and Let Live.'