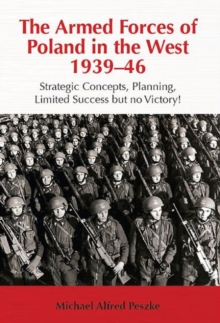 The Armed Forces of Poland in the West 1939-46 : Strategic Concepts, Planning, Limited Success but No Victory! Hardback

This monograph focuses on the strategic concepts, planning and the limited success of the Polish military, leading up to the British Guarantee of March 1939 and then throughout the Second World War.

The monograph discusses the valuable contribution of the Polish Military to its two Western allies, France and the United Kingdom leading up to the war, and the respite they received due to Poland's spirited defense that degraded German offensive capability by at least half a year.

Recreated in France, the Polish Military conceptualized a liberation policy of encouraging both France and the United Kingdom to undertake a Balkan Strategy to Poland's freedom.

Polish relations, with Hungary in particular, and Romania, while British relations with Greece and Turkey, made this a promising policy option.

In early 1941, Britain did send troops to aid Greece and the Poles were also about to send their Middle East-based force to Greece.

This Balkan" strategy" was strongly shared and espoused by Churchill and on the British planning table till late Summer 1944 when the Americans prevailed in landing forces in the south of France, rather than pushing north in Italy and possibly putting forces across the Adriatic into friendly Croatia and Slovenia.

This American policy was undoubtedly due to the pressures of finalizing the European war as soon as possible to get on with the war against Japan, and possibly also influenced by the American foreign policy of accommodating Stalin, who did not want Western Allies in his bailiwick.

One of the minor successes was an air supply link to the Polish Underground Forces but its capacity did not meet the needs or expectations.

Attempts to reconcile with the Soviets failed to materialize any benefits to the Polish cause, but Polish forces extracted from the Soviets by agreements between Churchill and Stalin, were prized by the British and strengthened British capability in the Middle East.

Following the Tehran Conference Polish strategic planning became irrelevant as at the same time the actual strength of the Polish Armed Forces and their professionalism increased.

When in early 1945 Churchill asked his staffs for a possible military operation to push the Soviets back out of Poland - Operation Unthinkable, the Polish military in the West and potential clandestine forces in Poland became a major asset.

This plan was not supported by the Americans or the important segment of the British coalition Government, the Labour Party, and further events in 1945 led to the decline in influence once enjoyed by the Polish military in the West.