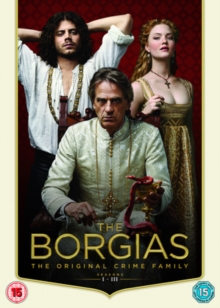 The first three seasons of the drama series starring Jeremy Irons as Rodrigo Borgia, the head of the powerful family that dominated Italy in the Renaissance.

In the first season, the Borgia family use their influence to gain Rodrigo, the rising power within the family, the position of Pope.

As Pope Alexander VI, Rodrigo then sets about using his power to ruthlessly increase the family's wealth and status, while committing almost every sin imaginable.

In the second season, Rodrigo makes new allies and must defend his papacy with the help of his son, Cesare (François Arnaud), though conflicts within the family add more strain to his already precarious situation.

The episodes are: 'The Borgia Bull', 'Paolo', 'The Beautiful Deception', 'Stray Dogs', 'The Choice', 'Day of Ashes', 'The Siege at Forli', 'Truth and Lies', 'World of Wonders' and 'The Confession'.

In the third season, Rodrigo, having survived an assassination attempt, works to maintain his power and influence in the church and his son Cesare struggles to prove his worth to the family.

The episodes are: 'The Face of Death', 'The Purge', 'Siblings', 'The Banquet of Chestnuts', 'The Wolf and the Lamb', 'Relics', 'Lucrezia's Gambit', 'Tears of Blood', 'The Gunpowder Plot' and 'The Prince'.