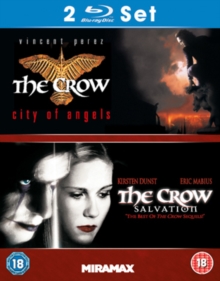 A double-bill of action films. In 'The Crow: City of Angels' (1996), the inhabitants of the City of Angels live within a gothic nightmare orchestrated by a despotic psychopath.

Single father Ashe (Vincent Perez) loses his own life and that of his son under the murderous regime, but is allowed the chance of revenge when he is resurrected by a mysterious crow.

He is guided on his path by a young psychic woman, Sarah (Mia Kirshner), who saw the crow's mighty powers in action once before when her friend Eric Draven was brought back from the dead.

In 'The Crow: Salvation' (2000), falsely convicted for the murder of his girlfriend, Alex Corvis (Eric Mabius) has spent three years on death row insisting that he was innocent.

The film opens with his graphically-depicted electrocution, performed on his 21st birthday.

After his wrongful execution, Corvis comes back from the dead to hunt down the real killer, helped by his girlfriend's sister, Erin (Kirsten Dunst), and the mysterious guardian crow who resurrected him.