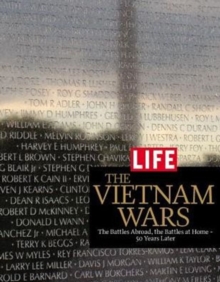 by The Editors Of Life

LIFE was one of the premiere sources of news about the Vietnam War and its coverage was revolutionary; Larry Burrows was the first photographer to document a war primarily in colour, because LIFE had figured out, with the new printing methods of the 1960s, how to accommodate more colour pages.

The pictures are as arresting today as they were in their time.

However, LIFE not only reinvented war coverage but we travelled as America did: from pro-war to "One Week's Dead." LIFE in fact led the way.

Many wars have served to protect America or America's interests.

Even the Civil War was about maintaining the Union. Vietnam was the first war since the Revolution that changed America profoundly - sociologically, and in how we thought about war, aggression and the feeling that America was infallible.

Journalists, college students and eventually soldiers themselves started to question such things as "America's always right" and "America has never lost a war." The war at home, which LIFE covered just as vividly as the war in Southeast Asia, was waged on the campuses and at the conventions.

All of that photography will be here in this 50th anniversary commemorative. This special book will include new interviews with veterans, a special photo essay on the history of the Vietnam Memorial in Washington, a pictorial report on unified Vietnam today, a revisiting of LIFE's editorial treatment of the war, an account of legendary photographers (Burrows, Robert Capa) lost during the era in Southeast Asia (including a reminiscence by Burrows' son, Russell, and daughter-in-law, LIFE's own Bobbi Baker Burrows), a report on the other photographs that made history (Eddie Adams' execution shot, Nick Ut's "Napalm Girl," including Joe McNally's revisit with the grown woman in Canada, exclusively for LIFE).

Also by The Editors Of Life