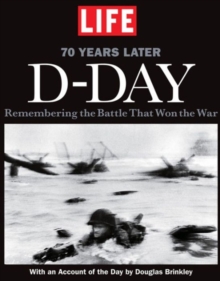 by The Editors of LIFE Magazine

Probably the most famous combat photographs ever made were those taken on the beach in Normandy during the D-Day invasions by Robert Capa, shooting for LIFE and going in with the first wave.

The saga of those images has been told before and will be again in this commemorative book: How Capa got out alive (he would later be killed while covering war in Southeast Asia), how he got his film back to London for transfer to New York, how most of his images were ruined and the 11 frames that survived had taken on a grainy quality that seemed to reflect the shaking beach under German bombardment, and even how Steven Spielberg used that look to inform the first half-hour of his classic film Saving Private Ryan.

Armed with two cameras, LIFE's Capa volunteered to hit the French coast, code-named Omaha Beach, with the first wave of 1st Division soldiers, and later remembered (in the kind of first-hand testimony that will fill this book) bullets tearing "holes in the water around him," and then what he saw as an idyllic shoreline becoming "the ugliest beach in the world."Henry Luce, looking back, said LIFE had not been born as a war magazine in 1936, but that world events made it one - it was necessary for the people at home to see what was really happening over there.

By the time 1.5 million American servicemen and women were squeezing into Southern England in advance of 1944's Operation Overlord invasions, a sizable battalion of LIFE photographers was among them.