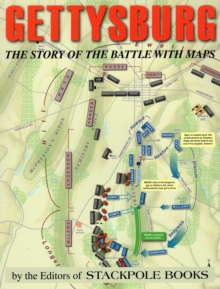 Gettysburg : The History of the Battle in Maps Paperback / softback

Edited by The Editors of Stackpole Books

The Battle of Gettysburg has never been seen like this - in a series of 70 crystal-clear color maps, each of which shows the same 3.5-by-4.5 mile section of the battlefield, allowing the reader to visualize the three-day battle as it developed across the entire field, from troop arrivals, movements, and attacks to key engagements and locations of commanders.

This unique approach sheds new light on important events such as the first clash west of Gettysburg on July 1, 1863, the fighting for Little Round Top on July 2, and Pickett's Charge on July 3.

Alongside the maps, a crisp narrative tells the story of the battle.

A perfect companion for battlefield visits and armchair-general debates, the book is also an ideal introduction for newcomers while its fresh perspectives will appeal to those who have read every book on the battle.