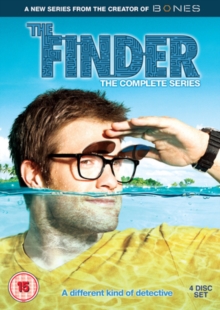 The Finder: The Complete Series DVD

Former US Army Major Walter Sherman (Stults) has gained peculiar sleuthing abilities after a traumatic brain injury he suffered during the Iraq War.

Now, along with his manager and legal advisor Leo Knox (Clarke Duncan), Walter busies himself by employing his newfound skills in solving crimes and other seemingly inexplicable events.

The episodes are: 'An Orphan Walks Into a Bar', 'Bullets', 'A Cinderella Story', 'Swing and a Miss', 'The Great Escape', 'Little Green Men', 'Eye of the Storm', 'Life After Death', 'The Last Meal', 'The Conversation', 'The Inheritance', 'Voodoo Undo' and 'The Boy With the Bucket'.