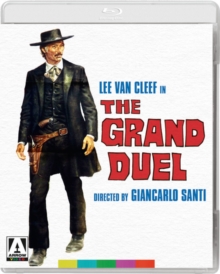 Giancarlo Santi directs this Western in which a man wrongly accused of murder sets out to prove his innocence with the help of a world-weary sheriff.

Philipp Wermeer (Alberto Dentice) stands trial for the murder of a powerful figure known as the Patriarch and the local sheriff, Clayton (Lee Van Cleef), knows that he didn't commit the crime.

However, it's not just the law Wermeer has to worry about: the Patriarch's equally powerful sons have put a bounty on his head.

Wermeer and Clayton will need to fight off hired assassins and uncover the true identity of the Patriarch's killer if they are to have any chance of survival.