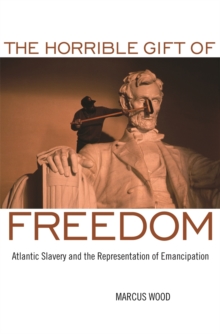 The Horrible Gift of Freedom : Atlantic Slavery and the Representation of Emancipation Paperback / softback

Meditations on the paradoxes generated around the ending of western slavery.

In his tour-de-force ""Blind Memory"", Marcus Wood read the visual archive of slavery in eighteenth- and nineteenth-century America and Britain with a closeness and rigor that until then had been applied only to the written texts of that epoch. ""Blind Memory"" changed the way we look at everything from a Turner seascape to a crude woodcut in a runaway slave advertisement. ""The Horrible Gift of Freedom"" brings the same degree of rigor to an analysis of the visual culture of Atlantic emancipation.

Wood takes a troubled and troubling look at the iconography inspired by the abolition of slavery across the Atlantic diaspora.

Why, he asks, did imagery showing the very instant of the birth of black slave freedom invariably personify Liberty as a white woman?

Where did the image of the enchained kneeling slave, ubiquitous in abolitionist visual culture on both sides of the Atlantic, come from? And, most important, why was freedom invariably depicted as a gift from white people to black people?

In order to assess what the inheritance of emancipation imagery means now and to speculate about where it may travel in the future, Wood spends the latter parts of this book looking at the 2007 bicentenary of the 1807 Slave Trade Abolition Act.

By taking a new look at the role of the visual arts in promoting the 'great emancipation swindle', Wood brings into the open the manner in which the slave power and its inheritors have single-mindedly focused on celebratory cultural myths that function to diminish both white culpability and black outrage.

This book demands that the living lies developed around the memory of the emancipation moment in Europe and America need to be not only reassessed but demolished.