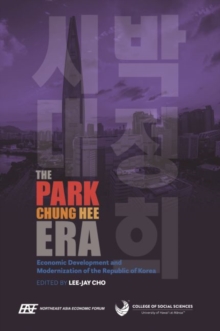 The Park Chung Hee Era : Economic Development and Modernization of the Republic of Korea Hardback

This volume presents a collection of authoritative summaries and analyses of the most significant economic policies of the Park Chung Hee years (1961-1979). It is the product of a major project by Korean academics and officials to critically review and analyze policies aimed at economic development and modernization of Korea.

Most of the project participants who contributed chapters to this book were closely involved in developing or implementing the policies, and thus were able to provide previously unavailable first-hand accounts and behind-the-scenes information.

The chapters are the result of a series of dialogues on Park-era policies among researchers, former senior government policymakers from Korea, and leading Japanese and American academics.

This approach based on an interactive research process has since been recognized by development economists as an innovative and successful means of producing policy-relevant analysis. Previous versions have been published in Korean, Chinese, and Japanese using various combinations of the original English-language policy papers.

Designed to represent the essence of Park's development strategies, the present volume is a thoroughly revised and abridged version of the Korean edition, which received the Best Book Award from the Korea Federation of Industries.