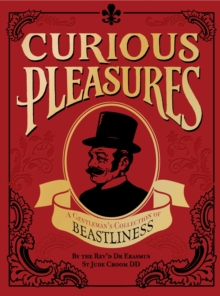 The best libraries in Victorian Britain kept this tome under lock and key, permitting access only to doctors and professors.

Scotland Yard had a copy in their reference library, and even Sherlock Holmes may have had recourse to a copy in certain investigations.

In private collections across the English speaking world, it was kept on top shelves, or safely stowed in locked cabinets, beyond the reach of minors, domestics and spouses.

Any woman who gazed upon its pages was said to have fainted away.

The church campaigned to have it banned and the German translation was burned at Nuremberg.

Many antiquarian book sellers believe the book to have been a myth, others claimed it changed hands at enormous cost, and some are certain all original copies are now lost.

But Curious Pleasures does exist and is back in print - nearly a century since it's last apocryphal edition.

This encyclopaedic treasure of adult pleasures, dysfunctions and unacceptable female behaviour has been fully restored with the original illustrations intact.

In modern hands, this forbidden work of scholarly madness will prove hilarious.