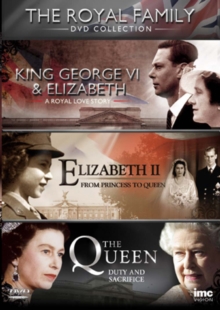 George VI came to the throne in December 1936 following the abdication of his older brother Edward, who relinquished the throne to marry American divorcee Wallis Simpson.

George and Elizabeth married in 1923 and went on to have two daughters, Elizabeth (who succeeded her father as Queen Elizabeth II) and Margaret. 'Elizabeth II: From Princess to Queen' looks at the early years of Elizabeth's life from birth through to her coronation as Queen.

The film features archive footage of events including her wedding and Edward's abdication speech, and rare cine film of her childhood with sister Margaret. 'Elizabeth II: Duty and Sacrifice' re-examines the Queen's early years, looking at how duty and sacrifice have shaped the Monarch we see today and explores the Queen's reign from the 1960s onwards - a time that brought anti-establishment ideas and a new Labour government committed to reform.

From then to the present day Elizabeth has faced challenges to her reign from all sides.

The once deferential press declared open season on the House of Windsor and suddenly a very private family was thrust into the often brutal media spotlight.