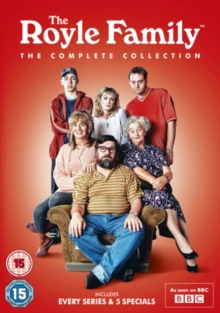 All 25 episodes from the British sitcom written by and starring Caroline Aherne and Craig Cash.

In the first series, we are introduced to the domestic conflicts of the Liverpudlian Royle clan, with Aherne as Denise, daughter of Jim (Ricky Tomlinson) and Barbara (Sue Johnston), and soon-to-be-wed-to boyfriend, Dave (Cash).

In the second series, Denise has now married Dave, but the Royle family sofa is no less crowded for that.

The third series sees the addition of Denise and Dave's first child which brings its share of new trials and tribulations to the semi-inert world of now-grandparents, Jim and Barbara.

The 1999 and 2000 Christmas specials are also included as well as the five one-off episodes: 'The Queen of Sheba', 'The New Sofa', 'The Golden Egg Cup', 'Joe's Crackers' and 'Barbara's Old Ring'.