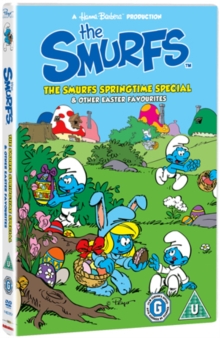 The Smurfs: Springtime Special and Other Easter Favourites DVD

Collection of six springtime adventures from the Smurfs.

In 'The Smurf's Springtime Special' Gargamel sets out to capture Mother Nature and prevent the arrival of Spring.

Can the Smurfs save the day? 'April Smurf's Day' sees the gang play a series of practical jokes on each other.

In 'The Golden Smurf Award' a witch disguises herself as a valuable trophy to try and capture the eager Smurfs.

Finally, in 'Smoogle Sings the Blues' the bluebird of happiness is transformed by a witch, reducing the whole village to a state of misery akin to Grouchy's.

It falls to Grouchy himself to try and save the day.