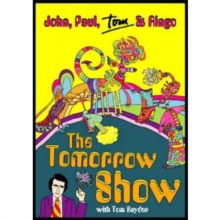 Hosted by Tom Snyder, 'The Tomorrow Show' was one of the most popular late-night talk shows in America in the 1970s and '80s.

The show featured a number of prominent guests over the years, including John Lennon in his last ever televised interview in 1975.

The interview with Lennon is included here, along with segments of interviews with Lennon's fellow Beatles, Paul McCartney and Ringo Starr.