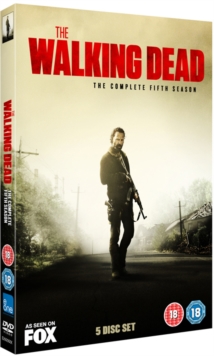 All 16 episodes from the fifth season of the US zombie adventure drama based on the comic books by Robert Kirkman.

In this season, the survivors face new threats from both the living and the dead in the form of walkers and the cannibalistic hunters from Terminus.

Meanwhile, a section of the group travels to Washington D.C. in search of a cure for the decimating virus. The episodes are: 'No Sanctuary', 'Strangers', 'Four Walls and a Roof', 'Slabtown', 'Self Help', 'Consumed', 'Crossed', 'Coda', 'What Happened and What's Going On', 'Them', 'The Distance', 'Remember', 'Forget', 'Spend', 'Try' and 'Conquer'.