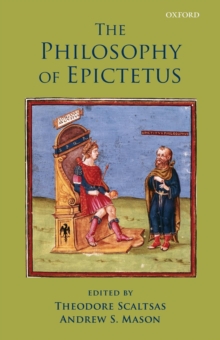 The Philosophy of Epictetus Paperback / softback

The Stoic philosopher Epictetus has been one of the most influential of ancient thinkers, both in antiquity itself and in modern times.

Theodore Scaltsas and Andrew S. Mason present ten specially written papers which discuss Epictetus' thought on a wide range of subjects, including ethics, logic, theology, and psychology; explore his relations to his predecessors (including his two philosophical heroes, Socrates and Diogenes the Cynic, as well as the earlier Stoictradition); and examine his influence on later thinkers. Written by some of the leading experts in the field, the essays in this volume will be a fascinating resource for students and scholars of ancient philosophy, and anyone with in an interest in the Stoic attitude to life.