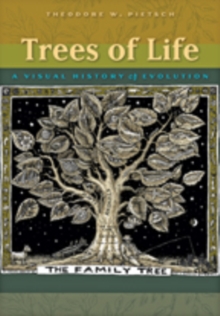 Trees of Life : A Visual History of Evolution Paperback / softback

For the past 450 years, tree-like branching diagrams have been created to show the complex and surprising interrelationships of organisms, both living and fossil, from viruses and bacteria to birds and mammals.

This stunning book celebrates the manifest beauty, intrinsic interest, and human ingenuity of these exquisite trees of life.

Theodore W. Pietsch has chosen 230 trees of life-from among thousands of possible contenders-dating from the sixteenth century to the present day.

His arrangement gives readers a visual sense of the historical development of these diagrams and shows how, in Darwin's words, "from so simple a beginning endless forms most beautiful and most wonderful have been, and are being, evolved." Pietsch's brief, accessible prose accompanies the diverse trees to fully reveal the engrossing history of human theories of evolution.

Over the centuries, trees of life appeared in a wide variety of forms; some were revered as iconic while others incited intense controversy.

The earliest examples were meant to portray the imagined temporal order in which God created life on Earth.

Never before has the full spectrum of trees of life been brought together in a single volume.

Pietsch has spent decades collecting and researching the origin and meaning of these evolutionary trees and presents a visually breathtaking and intellectually brilliant history of the form.