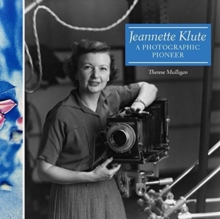 The focus of Jeannette Klute's career at Eastman Kodak Company was on new discoveries in color photography, in particular, the dye transfer color process.

As a photographic illustrator, she worked with physicist and author, Ralph M.

Evans, before being promoted to research photographer in charge of the Visual Research Studio of the Color Control Division.

Klute adopted the laborious dye transfer process in the interest of highlighting landscape and natural settings.

She promoted environmental concerns in her views, joining a small group of landscape modernists including Elliot Porter, who chose the new aesthetics of advanced color technology over the conventional appearance of black and white nature settings. The release of this title illuminates a particular period in twentieth-century American photography, accompanied by fine examples of Klute's work.

Klute's photographs are held by a number of collections in the U.S., and the RIT Archive Collections at Rochester Institute of Technology contains the largest holding of her lifelong work. THERESE MULLIGAN is the author of The Photography of Alfred Steiglitz: Georgia O'Keeffe's Enduring Legacy to George Eastman House (2000), and Bernie Boston: American Photojournalist (2006), and a contributing writer/editor for several essays and photographic journals. BECKY SIMMONS is a contributing author of Frans Wildenhain, 1950-1975 (2012), co-author of Past Meets Present: Recovering the History of Women at Rochester Institute of Technology, 1885-1945 (2009).