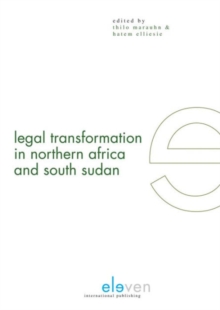 The contributions in this volume are mostly papers presented at the joint conference of the Gesellschaftfur afrikanisches Recht (African Law Association) and the Max Planck Institute for Comparative Publicand International Law, held in Heidelberg (Germany) on 4-5 November 2011, and the annual conference of the Arbeitskreis Uberseeische Verfassungsvergleichung in Limburg an der Lahn (Germany) on 5-7 July 2012. In 2011, two significant historical events occurred on the African Continent; namely, the popular uprisings in North African countries, which have widely become known as the 'Arab Spring', and the formal independence of South Sudan, Africa's youngest state just founded in July 2014.

Both major developments - the upheaval and the referendum for independence - initiated various lega lprocesses in response to the countries' respective political and socio-economic challenges. Despite different evolutionary concepts, the political upheavals in countries like Egypt and Libya are mirrored similarities to South Sudan in how to dealwith institution-building, constitution-making and its process, the role and rule of law in a nation-state, national and international conflict resolution mechanisms, and the involvement of a multitude of actors in the process of legal transformation.

Part I deals with selected issues of legal transformation following the 'Arab Spring'.

Part II focuses on specific national and international legal aspects of South Sudan after its secession from the former Republic of Sudan.