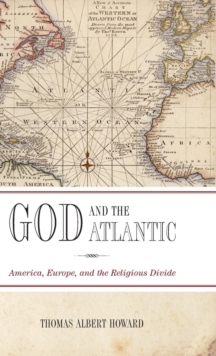 God and the Atlantic : America, Europe, and the Religious Divide Hardback

Since the eighteenth-century Enlightenment, the United States and Western Europe's paths to modernity have diverged sharply with respect to religion. In short, Americans have maintained much friendlier ties with traditional forms of religion than their European counterparts. What explains this transatlantic religious divide?Accessing the topic though nineteenth and early twentieth-century European commentary on the United States, Thomas Albert Howard argues that an 'Atlantic gap' in religious matters has deep and complex historical roots, and enduringly informs some strands of European disapprobation of the United States. While exploring in the first chapters 'Old World' disquiet toward the young republic's religious dynamics, the book turns in the final chapters and focuses on more constructive Europeanassessments of the United States. Acknowledging the importance of Alexis de Tocqueville for the topic, Howard argues that a widespread overreliance on Tocqueville as interpreter of America has had a tendency to overshadow other noteworthy European voices.

Two underappreciated figures here receive dueattention: the Protestant Swiss-German church historian, Philip Schaff, and the French Catholic philosopher, Jacques Maritain. While the transatlantic religious divide has received commentary from journalists and sociologists in recent decades, this is the first major work of cultural and intellectual history devoted to the subject.