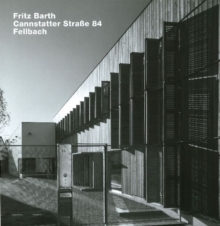 Text in English & German. Heroic 20th-century Modernism saw the private home as a place to first test out utopian theories -- a place for free play and experimentation where new approaches could be put into action, on a small scale but no less radical.

Here, where architecture and life are most closely interwoven, Frank Lloyd Wright, Gerrit Rietveld, Le Corbusier and even Konstantin Melnikov found the suitable space to give their visionary concepts a plastic reality.

The house built by the architect Fritz Barth for his own use in his home town of Fellbach places itself in an ironic, possibly melancholic distance from this kind of heroic pathos, but still has this tradition as its background. So it is considered by his builder as an experiment to determine the state of architecture at the start of the 21st century -- not to apply whatever offers itself to expand the architectonic repertoire (an approach that Barth considers to be a questionable, increasingly rhetoricised form of a somewhat naive belief in the future), but to find out what possibilities are still open to architecture and how far architecture still permits a concept of 'dwelling' in the sense the word was used by Heidegger.

The result is not a backward-looking homeliness, but a structure that, as a commitment to architecture in and of itself, stands his ground like few others in its time and place.

This is not least because its complexity its multi-layered, opulent fabric of allusions, references and quotations, only reveals itself gradually and with close observation behind a simple appearance targeted on the immediacy of experience and architecture.

Despite the somewhat polemical intentions of its builder and inhabitant, the house is not experienced as an ideological manifesto in bricks and mortar. It is and here lies its radicality, devoted to the immediate experience of 'dwelling' in so far as it does not allow, as Thomas Hettche writes in his essay, any distinction between surface and function, life and experience.