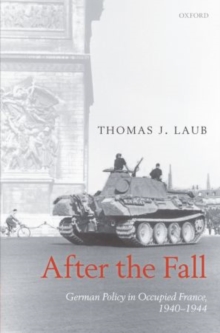 After the Fall : German Policy in Occupied France, 1940-1944 Paperback / softback

German policy in occupied France during the Second World War was in many ways a story of bitter internal conflict between the various German agencies in charge of the occupation.

After the Fall provides a detailed analysis of the struggle between these different agencies, highlighting the significant differences in ideology, policy, and method between the army, the SS, and the diplomatic service, and the rivalries between them in their struggle fordominance.

It also looks at what these battles implied for the direction of German policy in France, from the exploitation of the French economy and the suppression of resistance activity, to the attempt to carry out Nazi racial plans.

In the process, it sheds much light on both the inner workings of the Nazi regimeand on the decisions made by the French government during the course of the occupation.