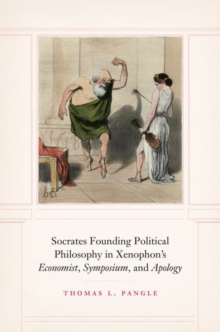 The oeuvre of the Greek historian Xenophon, whose works stand with those of Plato as essential accounts of the teachings of Socrates, has seen a new surge of attention after decades in the shadows. And no one has done more in recent years to spearhead the revival than Thomas L.

Pangle. Here, Pangle provides a sequel to his study of Xenophon's longest account of Socrates, the Memorabilia, expanding the scope of inquiry through an incisive treatment of Xenophon's shorter Socratic dialogues, the Economist, the Symposium, and the Apology of Socrates to the Jury.

What Pangle reveals is that these three depictions of Socrates complement and, in fact, serve to complete the Memorabilia in meaningful ways. Unlike the Socrates of Plato, Xenophon's Socrates is more complicated and human, an individual working out the problem of what it means to live well and virtuously.

While the Memorabilia defends Socrates by stressing his likeness to conventionally respectable gentlemen, Xenophon's remaining Socratic texts offer a more nuanced characterization by highlighting how Socrates also diverges from conventions of gentlemanliness in his virtues, behaviors, and peculiar views of quotidian life and governmental rule.

One question threads through the three writings: Which way of life best promotes human existence, politics, and economics--that of the Socratic political philosopher with his philosophic virtues or that of the gentleman with his familial, civic, and moral virtues?

In uncovering the nuances of Xenophon's approach to the issue in the Economist, Symposium, and Apology, Pangle's book cements the significance of these writings for the field and their value for shaping a fuller conception of just who Socrates was and what he taught.