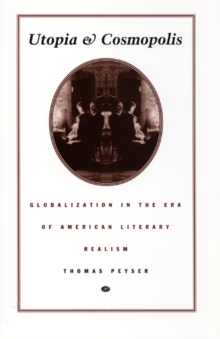 Utopia and Cosmopolis : Globalization in the Era of American Literary Realism Hardback

When did Americans first believe they were at the center of a truly global culture?

How did they envision that culture and how much do recent attitudes toward globalization owe to their often utopian dreams?

In Utopia and Cosmopolis Thomas Peyser asks these and other questions, offers a reevaluation of American literature and culture at the dawn of the twentieth century, and provides a new context for understanding contemporary debates about America's relation to the rest of the world. Applying current theoretical work on globalization to the writing of authors as diverse as Edward Bellamy, Charlotte Perkins Gilman, William Dean Howells, and Henry James, Peyser reveals the ways in which turn-of-the-century American writers struggled to understand the future in a newly emerging global community. Because the pressures of globalization at once fostered the formation of an American national culture and made national culture less viable as a source of identity, authors grappled to find a form of fiction that could accommodate the contradictions of their condition.

Utopia and Cosmopolis unites utopian and realist narratives in subtle, startling ways through an examination of these writers' aspirations and anxieties.

Whether exploring the first vision of a world brought together by the power of consumer culture, or showing how different cultures could be managed when reconceived as specimens in a museum, this book steadily extends the horizons within which late nineteenth- and early twentieth-century American literature and culture can be understood. Ranging widely over history, politics, philosophy, and literature, Utopia and Cosmopolis is an important contribution to debates about utopian thought, globalization, and American literature.