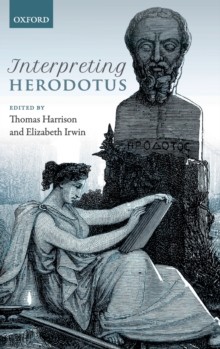 Charles W. Fornara's Herodotus: An Interpretative Essay (Oxford, 1971) was a landmark publication in the study of the great Greek historian.

Well-known in particular for its main thesis that the Histories should be read against the background of the Atheno-Peloponnesian Wars during which it was written, its insight and penetrating discussion extend to a range of other issues, from the relative unity of Herodotus' work and the relationship betweenhis ethnographies and historical narrative, to the themes and motifs that criss-cross the Histories - how 'history became moral and Herodotus didactic'. Interpreting Herodotus brings together a team of leading Herodotean scholars to look afresh at the themes of Fornara's seminal Essay in the light of the explosion of scholarship on the Histories in the intervening years, focusing particularly on how we can interpret Herodotus' work in terms of the context in which he wrote.

What does it mean to talk of the unity of the Histories, or Herodotus' 'moral' purpose? How can we reconstruct the context in which theHistories were written and published? And in what sense might the Histories constitute a 'warning' for his own, or for subsequent, generations?

In developing and interrogating Fornara's influential ideas for a new generation of scholars, the volume also offers a wealth of insights and new perspectives on the 'Father of History' thatattests to the vibrancy and diversity of contemporary engagement with Herodotus.