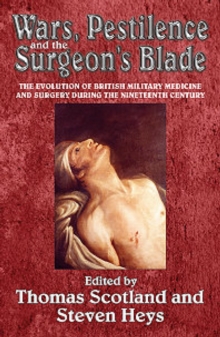 Wars, Pestilence and the Surgeon's Blade : The Evolution of British Military Medicine and Surgery During the Nineteenth Century Hardback

Wars in the 19th century were accompanied by a very heavy loss of life from infectious diseases.

During the Peninsular War, for example, for every soldier dying of a wound, four succumbed to disease. This book examines the development and evolution of surgical practice against this overwhelming risk of death due to disease.

It reviews three major conflicts during this time: the Peninsular War, the Crimean War and the Boer War and also considers many minor wars fought by the British Empire in the intervening years, and highlights significant medical and surgical developments during these conflicts. War surgery in the first part of the 19th Century was brutal and it had to be carried out swiftly.

It was performed at speed because there were no anaesthetics and the wounded often died during the procedure.

Surgeons focussed their attention on wounds of the arms and legs, because limbs were both easily accessible to the surgeon (unlike organs inside the abdomen and chest) and lent themselves well to amputation.

This was commonly the operation of choice for many war wounds of arms and legs.

Some surgeons performed more difficult surgical procedures to try to preserve the limbs and attempted to repair damaged tissues but these operations took longer and caused greater suffering to the patient.

Abdominal and chest wounds were not treated since surgeons did not have the means, the ability, or the understanding, to cut into the abdomen and chest to repair the damaged organs successfully. An important development which contributed to surgery moving forwards was the discovery of general anaesthesia, which became available in time for the Crimean War.

However, whilst it certainly rendered operations pain-free, it was associated with significant numbers of deaths during surgery on wounded soldiers because of the poorly understood effects that anaesthetics had, particularly on the heart.

As a result, operative surgery did not extend its scope a great deal, and military surgery remained focussed on surgery of the limbs.

However, fewer amputations were performed during the Boer War at the end of this period.