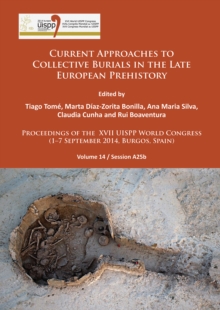 The present volume originated in session A25b ('Current Approaches to Collective Burials in the Late European Prehistory') of the XVII World Congress of the International Union of the Prehistoric and Protohistoric Sciences (UISPP), held in Burgos in September 2014.

Such features are generally associated with communities along the agropastoralist transition and fully agricultural societies of the Neolithic and Chalcolithic.

For a long time, human skeletal remains exhumed from collective burials were dismissed as valuable sources of information, their studies being limited mostly to morphological assessments and subsequent classification in predefined 'races'.

They currently represent a starting point for diversified, often interdisciplinary, research projects, allowing for a more accurate reconstruction of funerary practices, as well as of palaeobiological and environmental aspects, which are fundamental for the understanding of populations in the Late Prehistory of Europe and of the processes leading to the emergence of agricultural societies in this part of the world.

The articles in this volume provide examples of different approaches currently being developed on Prehistoric collective burials of southern Europe, mostly focusing on case studies, but also including contributions of a more methodological scope.