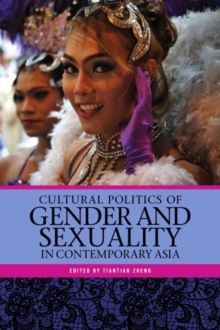 In globalizing Asia, sexual mores and gender roles are in constant flux.

How have economic shifts and social changes altered and reconfigured the cultural meanings of gender and sexuality in the region?

Based on intense ethnographic fieldwork, the chapters disentangle the ways in which gendered and sexual experiences are impinged upon by state policies, economic realities, cultural ideologies, and social hierarchies.

Whether highlighting intimate relationships between elite businessmen and their mistresses in China; nightclub performances by Thai men in Bangkok; single women's views of romance, motherhood, and marriage in Hong Kong, Shanghai, and Tokyo; or male same-sex relationships in Pakistan-each chapter centers around the stories of the gendered subjects themselves and how they are shaped by outside forces.

Taken together they provide a provocative entree into the cultural politics of gender and sexuality in Asia. By foregrounding cross-cultural ethnographic research, this volume sheds light on how configurations of gender and sexuality are constituted, negotiated, contested, transformed, and at times, perpetuated and reproduced in private, intimate experiences.

It will be of particular interest to students and scholars in anthropology, sociology, political science, and women's and LGBTQ studies.