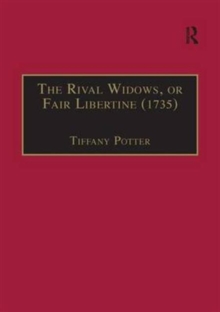 Elizabeth Cooper's The Rival Widows, or Fair Libertine provides a unique opportunity to restore to scholarly and pedagogical attention a neglected female writer and a play with broad and significant implications for studies of eighteenth-century history, culture and gender.

The play has not been reprinted since 1735; therefore this old-spelling edition gives scholars access to an important but neglected resource for studies of women writers and eighteenth-century theatre. In an original and extensive introduction, Tiffany Potter presents cultural and historical information that highlights the scholarly implications of this newly available play.

She offers a brief biographical sketch of the playwright; a summary of sources for specific elements of the play; an overview of the theatrical climate of the time (with particular focus on the conditions leading to the Licensing Act of 1737); a discussion of the place of women in eighteenth-century society; a summary of symbiotic cultural discourses of libertinism and sensibility in the early eighteenth century; and a discussion of the general cultural significance of Cooper's demonstration of the malleability of prescriptive gender roles. Further value is added to this edition through its appendices, which reproduce documents relating to the playwright Elizabeth Cooper and to the Licensing Act of 1737 (including the text of the Act itself).