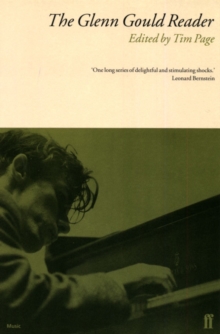 When Glenn Gould died in 1982 at the age of fifty, he left behind an astonishing legacy: in twenty-six years he had proved himself to be not only an extraordinary pianist but a brilliant critic. His writing - which appeared primarily in music journals and on record sleeves - was often as provocative as his performances: demanding, compelling, occasionally infuriating, but always the product of a singular artistic vision. This is a wide-ranging selection from Gould's criticism.