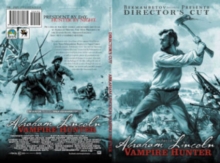 He's one of the most famous and revered men in all of American History.

The16th President of the United States. Abraham Lincoln. And he's a vampirehunter!In anticipation of the release of the summer blockbuster from TimurBekmambetov (Wanted), Bazelevs and Aspen Comics proudly present TheArt of Abraham Lincoln: Vampire Hunter.

This deluxe edition containsnever-before-seen storyboards, concept art, production illustrations, andcostume designs, as well as drawings from visionary director Timur Bekmambetov. This behind-the-scenes glimpse into the creation of the hit film also featurescommentary by Bekmambetov, along with several others who helped bring thisextraordinary film to life.

Don't miss out on this rare, behind-the-scenes lookinto the creation of one of the most talked about new movies of the year,Abraham Lincoln: Vampire Hunter!