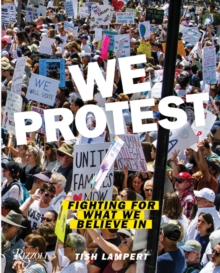 In the last few years we have seen a wave of activism wash across our nation and inspire unprecedented protest and civic engagement.

People came together in record-breaking numbers, outspoken and persistent.

With the winds of resistance at their backs, people linked arms and set out to defend our freedoms and each other. Photojournalist Tish Lampert captures the spirit of the heroes and ordinary citizens on their activist journey to defend their American values during the most conflicted era in our recent history.

The book charts the chronology of social-change movements that have dominated the headlines over the past several years: the fight for women's rights and gender equality, immigration rights, civil liberties, gun violence, and the environment.

Lampert takes us to the front lines of activism, where she has documented each protest and their respective leaders, as well as the legions of ordinary Americans standing together to protect the values of our great nation.