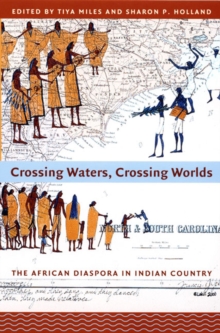 This interdisciplinary collection combines historical studies of the complex relations between blacks and Indians in Native communities with considerations and examples of various forms of cultural expression that have emerged from their intertwined histories.

The contributors include scholars of African American and Native American studies, English, history, anthropology, law, and performance studies, as well as fiction writers, poets, and a visual artist.

Essays range from a close reading of the 1838 memoirs of a black and Native freewoman to an analysis of how Afro-Native intermarriage has impacted the identities and federal government classifications of certain New England Indian tribes.

One contributor explores the aftermath of black slavery in the Choctaw and Chickasaw nations, highlighting issues of culture and citizenship.

Another scrutinizes the controversy that followed the 1998 selection of a Miss Navajo Nation who had an African American father.

A historian examines the status of Afro-Indians in colonial Mexico, and an ethnographer reflects on oral histories gathered from Afro-Choctaws.

Hill, and an interview with the Creek poet and musician Joy Harjo.

The Native American scholar Robert Warrior develops a theoretical model for comparative work through an analysis of black and Native intellectual production.