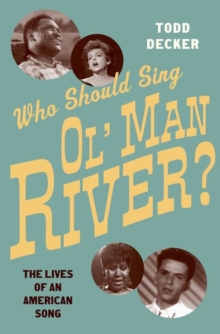 Who Should Sing Ol' Man River? : The Lives of an American Song Hardback

In the mid 1920s, Jerome Kern and Oscar Hammerstein II wrote a song called "Ol' Man River" that combined the seriousness of a Negro spiritual with the crowd-pleasing power of a Broadway anthem.

Inspired, according to Kern, by the voice of the African American singer Paul Robeson, "Ol' Man River" went on to great success in the Broadway musical Show Boat and became a signature song for Robeson, who turned the tune towards his own goals as an activist. But the story of "Ol' Man River" goes deeper than the curiosity of a song recorded by so many in so many different ways.

For at the heart of Oscar Hammerstein's lyric is a clear-eyed vision of the black experience in American history.

Anyone-black or white-who thought they should sing "Ol' Man River" has had to deal with the charged racial content of the song.

Who Should Sing "Ol' Man River"? traces this aspect of "Ol' Man River's" course through American history, an at-timeshigh-stakes journey where the African American struggle for dignity and equality came down to the lyrics of a popular song.

However beyond Robeson and Show Boat, "Ol' Man River" also had a long and rich life in the world of popular music.

An astonishing variety of singers and musicians from across the musical spectrum-from pop to jazz, opera to doo wop, rhythm and blues to gospel to reggae-all chose to perform or record it.

Who Should Sing "Ol' Man River"?: The Lives of an American Song traces out the performance history of this remarkable song by listening closely to over two hundred recorded andfilmed versions dating from the song's debut in 1927 to the present.

Many famous pop singers made "Ol' Man River" a signature song; among them Bing Crosby, Frank Sinatra, and Judy Garland: white performers who took up a lyric told from the black perspective.

Opera singers-black and white, male and female-took it up as well. And a slew of surprising names from the first decades of rock and roll also recorded this inescapable tune, among them Sam Cooke, Ray Charles, Aretha Franklin, the Temptations, Cher, and Rod Stewart.