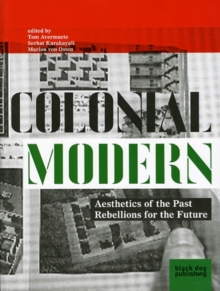 Colonial Modern: Aesthetics of the Past Rebellions for the Future Paperback / softback

Colonial Modern: Aesthetics of the Past, Rebellions for the Future is a reader on the relationship between modernism and the project of modernisation in architecture, as well as the intertwining of both in the context of colonialism and decolonisation.

Colonial Modern focuses on the dual topics of the relationship between the post-war aesthetic regime of modernism and the project of modernisation in architecture and urban planning.

Colonial Modern is based on the exhibition In the Desert of Modernity: Colonial Planning and After, at the Haus der Kulturen der Welt [House of World Cultures] in Berlin and Les Abattoirs de Casablanca.

Colonial Modern reflects contemporary research into architectural modernism and colonialism, and uses the thesis of "negotiated modernism" to initiate new debates on conceptions of modernism--and inevitably postmodernism--in an interdisciplinary context.

The book includes significant texts by Nezar AlSayyad, Mark Crinson, Francoise Navez-Bouchanine, Sven Olov Wallenstein and other specialists in the field and provides a strong visual representation of the subject with the work of artists and architects forming a well rounded debate on issues relating to modernism and colonism.