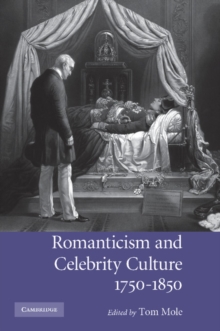 We live in a celebrity-obsessed culture, but until recently the history of celebrity has been little discussed.

The contributors to this innovative collection locate the origins of a distinctively modern kind of celebrity in the Romantic period.

Celebrity was from the beginning a multi-media phenomenon whose cultural pervasiveness - in literature and the theatre, music and visual culture, fashion and boxing - overflows modern disciplinary boundaries and requires attention from scholars with different kinds of expertise.

Looking back to the 1720s and forward to the 1890s, this volume identifies the people and institutions that made the Romantic period a pivotal moment in the creation of celebrity.

Tracing connections between celebrity and the period's discourses of heroism, genius, nationalism, patronage and gender, these essays map the contours of a cultural apparatus that many of the period's central figures became implicated in, even as they sought to distance themselves from it.