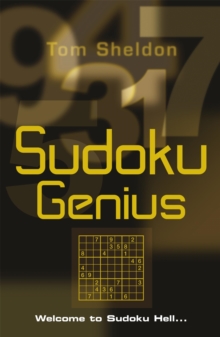 Are you ready for the ultimate challenge?To satisfy with the national obsession with Sudoku, many books have come up with variations to keep the game challenging. SUDOKU GENIUS is different. Tom Sheldon, a mathematician and researcher in bioinformatics, has used the original rules to create the first ever genius-level Sudoku: 144 of the simplest, but hardest puzzles in the world. This is a must-have for the seasoned Sudokist who has played the game, but needs to have their problem-solving capabilities pushed to the very limits.

SUDOKU GENIUS begins with a Masterclass, that discusses strategies like Last Square Left, The Force and The Pincer - then leads the reader through nine circles of Sudoku hell, from Merciless to Murderous, ending with a final puzzle that only the most hardened player will crack!With new strategies and discussions of 'Sudoku myths', this is the ultimate test of Sudoku wits.