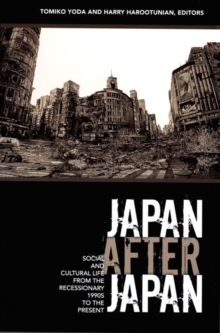 Japan After Japan : Social and Cultural Life from the Recessionary 1990s to the Present Hardback

The prolonged downturn in the Japanese economy that began during the recessionary 1990s triggered a complex set of reactions both within Japan and abroad, reshaping not only the country's economy but also its politics, society, and culture.

In Japan After Japan, scholars of history, anthropology, literature, and film explore the profound transformations in Japan since the early 1990s, providing complex analyses of a nation in transition, linking its present to its past and connecting local situations to global developments.Several of the essayists reflect on the politics of history, considering changes in the relationship between Japan and the United States, the complex legacy of Japanese colonialism, Japan's chronic unease with its wartime history, and the postwar consolidation of an ethnocentric and racist nationalism.

Others analyze anxieties related to the role of children in society and the weakening of the gendered divide between workplace and home.

Turning to popular culture, contributors scrutinize the avid consumption of "real events" in formats including police shows, quiz shows, and live Web camera feeds; the creation, distribution, and reception of Pokemon, the game-based franchise that became a worldwide cultural phenomenon; and the ways that the behavior of zealous fans of anime both reinforces and clashes with corporate interests.

Focusing on contemporary social and political movements, one essay relates how a local citizens' group pressed the Japanese government to turn an international exposition, the Aichi Expo 2005, into a more environmentally conscious project.

Another essay offers both a survey of emerging political movements and a manifesto identifying new possibilities for radical politics in Japan.