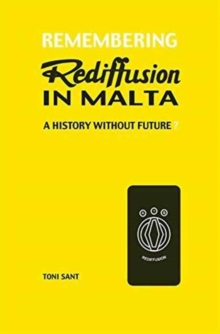 Remembering Rediffusion in Malta : A history without future? Paperback / softback

Over the following decades the company lead the development of broadcasting in the country, introducing regular Maltese language programmes in the years immediately after World War II and television in the early 1960s.

Operating a veritable monopoly for almost forty years, Rediffusion's presence in Malta came to an end in 1975.

The cable radio service they created lingered on until 1989 and Malta's national public broadcasting services still operate from buildings originally erected by Rediffusion.

This is the first book in English exploring the history of broadcasting in Malta through the relics of Rediffusion memories.

The perspective presented here offers an initial critical analysis of the unprocessed archival resources that have accidentally survived over the years.

While it is relatively easy to recover a significant narrative to tell a history of the Rediffusion years in Malta from the primary sources that still exist, albeit rather limited and scattered, it is rather harder to delve much deeper into many of the specific aspects arising from any close study of these materials.

It is therefore essential now, more than ever, to remember Rediffusion in Malta before the surviving memories perish or become odd ruins over which media archaeologists will ponder for many years to come.